Notes from a Diary in Asiatic Turkey [With illustrations]

No more beautiful situation could be imagined than that which Amasia occupies. Built on the two sides of the Yeshil Irmak, which is spanned by five bridges, the red-tiled houses to the right rise in terraces several hundred feet above the valley, while those to the left are overhung by a sheer precipice of over a thousand feet. The summit is crowned by the imposing ruins of an old castle, and half-way up, on the face of the rock, have been perforated the extraordinary sepulchres of the kings of Pontus. The mutessariflik stands close to the water's edge, just below this remarkable cliff, and there we found the governor himself, luxuriously sipping his coffee under the shade of a fine spreading walnut. An old gentleman of very neat and dapper appearance, he was excessively friendly and talkative. Everything was couleur de rose. He had just received a telegram announcing the conclusion of the war, and the state of affairs in his own province was eminently satisfactory.
The Turks and Armenians, it is true, were perpetually' squabbling before he came ; but I soon put a stop to all that,' he said, 'and now I really believe that they have learned to appreciate the advantages of living in concord and friendship with one another.'
After a brief conversation we returned to the khan on the opposite bank of the river for lunch, and then took a young zaptieh to show us the rock tombs and the castle. The tombs are reached by a flight of steps hewn out of the solid rock and guarded by a parapet.
In form they are like enormous sarcophagi, with an arched top, entirely detached from the cliffs, except as regards their base, by a narrow passage about one yard in width and six in height, which runs right round them. A small square opening in the face of the central block gives access to the chamber in which the body was placed. There are five in all, dating probably from the second or third century before Christ, and they face one another across a deep rift by which alone the ascent can be made from the side of the town.
The abrupt nature of the ground and the loose rolling stones with which it is covered afford the most precarious foothold, and we should have found it difficult to reach the summit at all but for the assistance of our companion, who climbed with the agility of a goat. ...

On the out journey, our three and a half hours' ride was rather spoiled by the weather — a thick curtain of mist covering the hills and driving up the valley from the north, so that we could obtain only occasional glimpses of the superb scenery. The road winds along the densely wooded slopes at a great height above the stream, which is crossed by several quaint little bridges with vaulted coverings of timber ; and a number of diminutive white churches with slate roofs peep from their rocky eyries among the dark masses of walnut and pine. The monastery itself is built against the wall of a smooth precipice near the summit of a hill, strewn with boulders and clothed with a thick belt of firs from its centre to its base. A zigzag path winds up to the level platform from which it springs, and from this point the door is gained by a great flight of steps along the face of the cliff.
At the entrance we found the Archimandrite, Gerasimus, and his brother priests collected to welcome us ; and passing through two courtyards, in the centre of one of which stands a tiny bell tower and the natural rock cavern that forms the main portion of the church, we were ushered into the guest-room to partake of a preliminary refreshment in the shape of coffee and cigarettes. The monks told us that the monastery had been built a thousand years ago, and that the Archimandrite himself had lived there for more than thirteen.
None of them could speak anything but Greek, except one who had recently been admitted, and, having learned a modicum of almost unintelligible French, was deputed to show us the library and the chapel. The latter is very small and dark, being lighted principally by a few lamps of fine- wrought silver, suspended from the roof. In a cupboard to the left of the altar are a quantity of relics, a handsome chased silver casket containing a decayed bone, once part of the anatomy of St. Barnabas, and a splendid Byzantine manuscript of the Gospels. On a screen in front of the sanctuary hangs a picture which might represent anything in the world, but it was painted by St. Luke, and its frame is a really magnificent piece of carving. Two portentously fat candles are especially prized as the generous gift of the Sultan, Selim i. That the library was not much used by the monks we inferred from the fact that the lock of the door was so rusty that our combined exertions were necessary in order to turn the key. The room, too, was inches deep in dust, and its contents a little disappointing. There were one or two illuminated missals, neatly written, but of no great age, and the majority of the volumes were copies more or less recent of the works of the early Fathers. We lunched with our hosts before leaving, and prevailed on the Archimandrite to sit for his portrait. Arrayed for the occasion in full canonicals, a long black cassock, the tall black chimney-pot head-dress of the Greek Church, and a superb cross of brilliants round his neck, he looked a very imposing personage ; but unfortunately the picture failed completely, although he good-naturedly sat outside in the drenching rain that we might have the advantage of what little light there was. The whole fraternity accompanied us to the gate to bid us an affectionate farewell, and long after we had parted from them we saw the long-robed group still standing among the mist wreaths at the top of the great stairway watching our descent. So few travelers ever pass their way that our visit had probably been quite as novel and pleasant an experience to them as it had been to ourselves. While two of our party remained behind to sketch the view of the monastery from below, the third rode leisurely back by himself; but half an hour later he was discovered sitting disconsolately by the roadside, having been brought to a standstill by a cordon of police, who regarded his appearance as suspicious, and declined to let him pass until our zaptiehs came up, considerately remarking that they generally shot straight, and would give him an opportunity of judging if he insisted on passing them.  ...

We lunched on the verandah of a small chalet overlooking the village of Hampsi Keui, and commanding a magnificent view of the valley the middle distance cut by the bold outline of two sheer cliffs streaked with brilliant red, one topped by the ruins of a castle and the other by a little Greek church. The number of these places of worship indicates the presence of a Christian element in the district which, although much reduced by persecution and massacre, is still very considerable. High up on the western slopes stands a monastery dedicated to the Virgin, in appearance and position similar to that of Sumela (μάλλον πρόκειται για την Παναγία Γουμερά). No mere word-painting can convey an adequate idea of the extraordinary beauty and variety of the forest which clothes the declivities of the great Zigana range.

Άρδασσα (Τορούλ)
Once or twice we passed a village where the women were threshing corn on the roofs of their houses, and where we first remarked the curious conical-shaped excrescence in the walls which, as in the Dolomite country, serves the purpose of an oven. We had been nearly twelve hours in the saddle, and the twilight was already filling with a darker indigo the two great rifts into which the valley branches before we came in view of our destination.
A second short-cut, more narrow and precipitous than the last, brought us down to the river level, and soon afterwards we crossed a bridge and reached the village of Ardossa, behind which tower a series of jagged cliffs crowned with the ruins of a castle. Here we rejoined our muleteers who had been sent in advance with the baggage, and took up our quarters in a bare room in the khan, which, though innocent of windows, was luckily also innocent of fleas.

At midday we reached a village lying among orchards of quince and cherry at the foot of the hill upon which the large town of Gumush Khane₁ is built, and sat down in the khan to refresh ourselves with some of the largest grapes ever seen out of an English conservatory.

₁ "The House of Silver," so called from the neighbouring-mines. Careri, who passed through it in 1683, mentions a gold-mine in the valley six miles to the south, which had been abandoned owing to its inundation by the river' (Churchill's Collection of Voyages, vol. iv., published in 1745: 'Voyage round the World by Dr. John Francis Genelli Careri,' translated from the Italian) 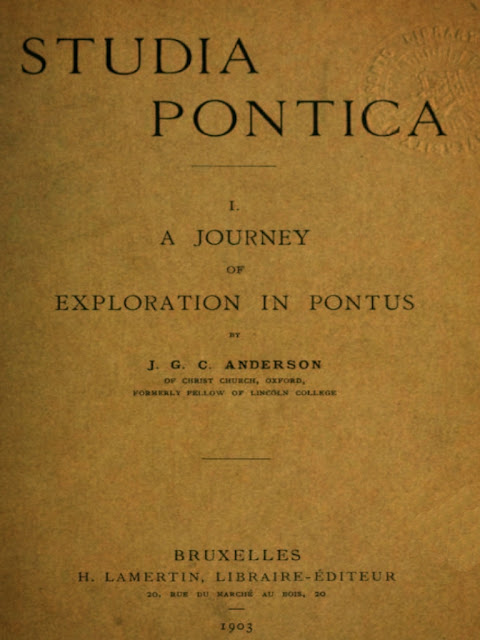 Studia Pontica, A journey of exploration in Pontus, vol I 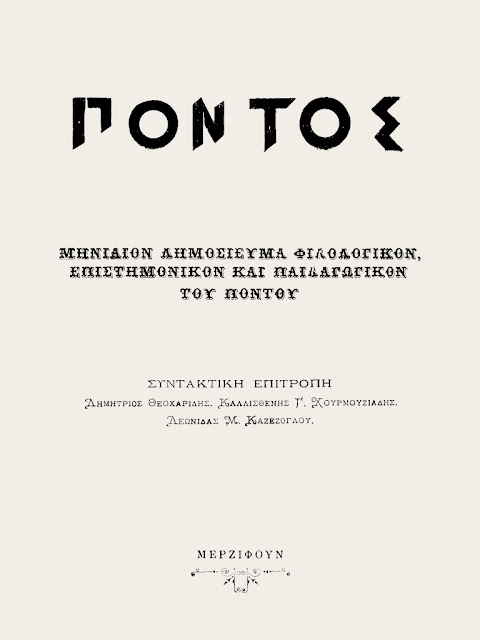